Here is my translation, or rather extreme reworking, of a translation of the hymn Ave stella maris, which Caswall did—“Hail Bright Star of Ocean,” to fit the Lutheran version. In the 16th century, a Lutheran scholar, Camerarius, amended it to harmonize with the Lutheran understanding of Mary in the Book of Concord. Note that the term “ever virgin” was left intact. While the curious change from “star” to “drop” appears here (other Lutherans left star alone) to be an attempt to put Mary in a more humble frame, it is actually a return to the original term used by Jerome, who, translating the name Miriam in the Old Testament, rendered it (in his experienced judgment) “stilla maris.” By distortion of dialect or mind, this eventually became “stella maris,” which to be sure inspires many more flights of poetic devotion than does “stilla maris.” I read that, generally speaking, a “stilla” is more substantial than a “guttula,” though what caused Jerome to choose one over the other I don’t know. The text and melody are those of Ludecus (no one outside of Mark Brandenburg appears to have preserved or attempted to preserve this hymn), where it is appointed for the Annunciation at Vespers, but might reasonably extended to other feasts of the holy Virgin. 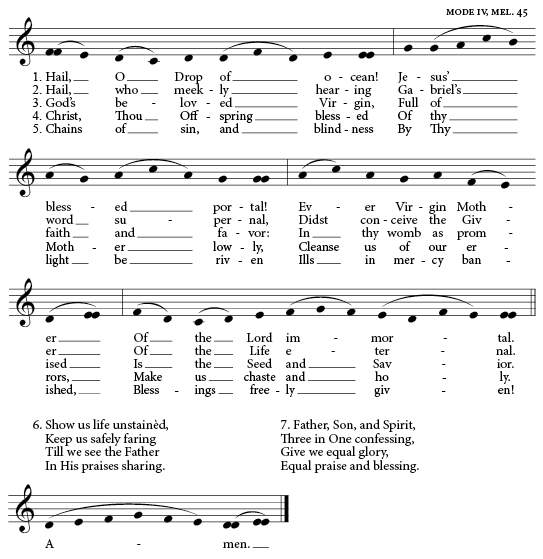 3. God’s beloved Virgin,
Full of faith and favor:
In thy womb as promised
Is the Seed and Savior.

4. Christ, Thou Offspring blessed
Of thy Mother lowly,
Cleanse us of our errors,
Make us chaste and holy.

5. Chains of sin, and blindness
By Thy light be riven
Ills in mercy banished,
Blessings freely given!

6. Show us life unstainèd,
Keep us safely faring
Till we see the Father
In His praises sharing.

7. Father, Son, and Spirit,
Three in One confessing,
Give we equal glory,
Equal praise, and blessing.  Amen.