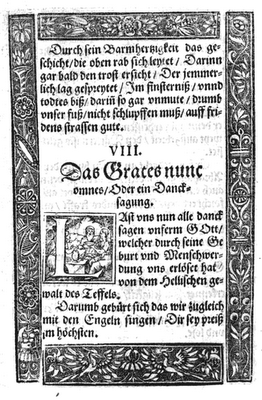 Here is my translation of the old Latin sequence for Christmas midnight mass, "Grates nunc omnes reddamus," (which has an old traditional German version that served as the basis for Luther's "Gelobet seist du, Jesu Christ." It has an expanded form, though that form may not have been used in German churches (Luther commends its retaining, and calls it a short sequence). Here is a list of early paraphrases, in Danish, with parenthetical references to the agents referred to in the first stanza (some say "Who by His word…and His birth…" or "by His blood" or "by His death").

There is some mention of antiphonal singing and repititions of the part beginning "Huic oportet…" which may refer to this longer form. Stanzas of Latin alternated with the German hymnic version, as is done for the sequence of the high feast of Easter, Victimae paschali, with which "Christ ist erstanden" was song responsively. Here is a translation of Bäumker's comments:

Wackernagel wrongly classifies the Christmas sequence “Grates nunc omnes” among the songs of St. Gregory I. This great bishop may have composed hymns, but no sequences.
Schubiger (Sängerschule, p. 52) gives the song from the St. Gallen codex (1507) with the title “Auctore incognito.” [Author unknown]. According to the aforesaid Ordinarium for the church in Schwerin (1519), it was performed thus: a few singers first intoned the sequence, i.e., sang the first part three times up to the word “potestate.” Then the choir, kneeling, continued with “Huic oportet,” etc. At this, the congregation thrice sang “All Praise to Thee, O Jesus Christ.” This German hymn is thus closely related with the sequence; even certain melodic passages share similarities. In the Andernach Hymnal of 1608, the 3-stanza hymn “All Praise to Thee, O Jesus Christ” concludes each time with the final words of the sequence: “Gloria in excelsis (Deo).” In this hymnal, the greatest similarities with the sequence’s contents are found in the second stanza:

“All praise to Thee, O Virgin mild,
Through whom Christ became a child,
Us wretched sinners to sustain
That through Him we might freedom gain.
So let us now sing gloria in excelsis Deo.”

The melody given below shows the parts for the regular stanzas (a), and the refrain or final, shorter stanza (b). A normal use is shown entirely in the notation, using stanza 1a and 4, probably also with an Alleluia in the proper mode. The original Gregorian notation is followed by my setting into modern notation.

1a. Thanks let us render
All to the Lord God, our Master,
Who by His chaste incarnation
Hath redeemed and released us from the devil’s
Domination

(1b. Thanks let us render
All to the Father eternal,
Who by His faithful devotion
Hath brought the world by His virginal mother
Full salvation.

2a. Thanks let us render
All to the Most Holy Fire-
Who by His great lovingkindness
Hath purified us of our idol-worship
And our blindness.

2b. Thanks let us render
All to our God, one in substance
And three of person forever,
Kindest Redeemer, our gracious and gentle
Lord and Savior.

3a. Thanks let us render
All to the virginal mother,
By whose most fertile submission
Redemption’s Author in very Godhead
Came to fruition.

3b. Thanks ever render
All the angelic dominions
And all the virtues celestial
To the Almighty, who saved and rescued
Mankind terrestrial.)

Refrain
4. Thus it behooves us
To sing to Him
With the angels forever:
"Glory in the highest."